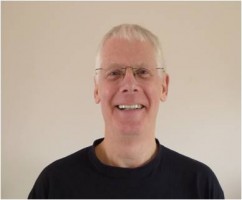 Dental implants have given me my smile back

When you have a gap and other surrounding teeth are failing, it is sometimes beneficial to consider more comprehensive dental implant treatment, rather than react to and treat each problem individually.   In this case study, a patient has a missing front tooth and root infected teeth around it.  He decides to have all the problem teeth removed and three dental implants placed to support a five-tooth screw-retained fixed bridge.  He is very happy with the smile and the long-term stability that his new teeth have given him.

As a teenager, Roger had to have three of his front teeth capped, after what he describes as a “discussion with a cricket ball”.   This dental work lasted for forty years, until his upper front tooth broke off.   A denture was used to fill the gap.  This worked well for a few years until he started to get repeated infections in the root area of his two upper front teeth.

Roger’s general dental practitioner advised him that other restorative options, such as a conventional bridge fixed to adjacent teeth would have a poor prospect for long- term success.  He was referred to a root canal specialist, for an expert opinion.

The specialist soon established that the infections were likely to recur even after treatment, so Roger was advised to talk to Dr Steve Larcombe about dental implants.  Roger comments, “I am proactive rather than reactive to problems, so I chose implant treatment.”

Dr Larcombe took radiographs (X-rays) of the area and it became apparent that the infections had affected the surrounding bone.   Several of the adjacent teeth were in a similar state and also at risk of breaking off in the future.

A range of implant options were discussed.  These included a single implant for the front tooth through to the more comprehensive solution of two or three implants.  To avoid the problem of future breakages resulting in several visits to the dentist, a treatment plan was agreed that would provide long-term stability.   Roger explains “I decided to have them all done in one go – why not?”

Temporary teeth were provided using a removable five-tooth plastic denture after the failed upper front teeth were removed.   A period of four months healing allowed the infections to clear and the bone graft to fuse with the jawbone (a process called osseointegration).  Dr Larcombe explains, “This results in a safe approach for an optimum, predictable and positive outcome.”

Dental implants were placed at three strategic locations to support a new, five-tooth screw-retained fixed bridge.   Dr Larcombe comments, “The final bridge of teeth is pleasing in appearance and a very accurate fit against the gum.  It also bites harmoniously with the lower teeth and provides the fixed, long-term solution that our patient required.”

Roger is retired, but has an active social life as Chairman of the MX-5 Owners Club.  This role involves contact with members, chairing meetings and presentations.  He is delighted with his dental implants and explains how they have helped him, “You get your life back as you want to lead it.  There is now no risk of my teeth falling out during a presentation.  When we travel it’s easier; I don’t have to take spare dentures and the liquids you need.  My wife said that I had got my smile back.”

He concludes, “Throughout the whole process Steve’s manner, professionalism and eye for detail meant I felt no regret at any stage on taking on this journey.  I have never been one to enjoy a visit to the dentist.  Steve made the whole experience one that I look back on with a smile.” 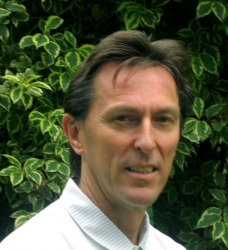