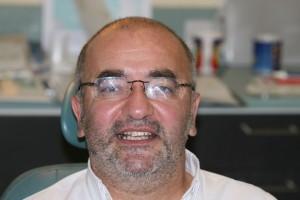 I wouldn't miss a heart beat to have dental implants again

Joe knew that dental implants would be the best choice for him, rather than a denture.  Despite a fear of the dentist after years of dental problems, he was not discouraged. He found the right dentist and had five implants placed.  Before treatment, Joe was frustrated with having to choose soft foods because of his missing back molars.   Now his new teeth have given him back the confidence and ability to eat what he wants.

Joe experienced frequent problems with his teeth and had gum disease for a number of years.  He eventually lost seven teeth in his upper jaw which left him with no back molars and a very loose front upper left central incisor.

Over time, his missing teeth became more of a problem.  Joe was unable to eat certain foods and he struggled to smile because of the loose front tooth, which also caused him constant pain.

Joe’s research eventually led him to Dr Sarab Oberai of the Ashford Village Dental Practice.  Joe explains, “The gaps in my mouth meant that a conventional bridge was not an option.  So the choice was dentures or implants.  Friends told me that I would probably hate dentures.  I did my homework, so I knew that dental implants were the best option for me.”

Dr Oberai recommended that Joe should have a total of five teeth implants.  Treatment would involve four implants placed at the back of his mouth, two each side to support two three-unit bridges.  The fifth implant would replace his central incisor.

Joe comments, “I had feedback from people who have had dental implants and thought they were fantastic.  I know that you can go abroad to have implants, but I wanted quality materials and workmanship.   Dr Oberai was very professional and gave me all information I needed.”

Joe agreed to implant treatment but admitted to being rather apprehensive.  After his previous dental problems, he was frightened of going to the dentist.  He was soon put at ease by Dr Oberai.  Joe explains, “One thing I hate is my teeth hurting.  I felt very little discomfort during and after the treatment.  Dr Oberai was positive and comforting.  He kept me informed about how well it was all going.  Consequently I was calm and relaxed.”

All the implants have now been placed.  Two three-unit bridges have been fitted to the implants on each side of his mouth.  The front upper left central incisor has also been replaced by an implant and restored with a new permanent tooth.

After the replacement of his missing molars and front tooth, Joe was amazed that he could eat and chew all his favourite foods again.  He comments, “I ate peanuts for the first time in years recently.  I can eat normally.  I’m not afraid of biting into an apple.”

Joe is glad he has had dental implant treatment and explains, “I wouldn’t miss a heart beat to have the procedure done again.  I know I got a lot of value for my money.  Implants have given me confidence.  I can open my mouth without worrying about unsightly gaps showing – and no toothache any more from the front tooth.”

Joe is 56 and works as a Product Manager.  He is particularly pleased that dental implants have helped with the time he spends relaxing with his family.  He concludes, “My wife and I love going out to eat.  I used to have to be selective with my food choices.  But now after implants, I’m looking forward to enjoying a piece of steak!”